I ran a workshop at the South East Essex Embroiderers’ Guild called ‘Altered books: threads of thought‘. I love stitching on paper and wanted to share the idea of stitching in an altered book with the embroiderers. Not everyone in the group was comfortable with the idea of tearing pages out of a book – but most were willing to give it a try.

For me, the benefit of using an old book is to give something unloved a new lease of life rather than thinking you are ‘ruining’ it. Also, by using a page that already has content already on it, either images or text, can be a useful prompt and helps to remove the fear of the blank page.

I gave the group a couple of themes to play with: the first was an embroidered colouring book idea and the second was to embroider a spirograph. Each person took the idea and developed it in their own way, using collage, stitch, maps and even mirrors.

For this year’s art trail SEVEN has chosen an estuarine theme.

We each used an A5 concertina style sketchbook, and as with the estuary, the pages all flow into one another – there is no need to ‘turn the page’.

As part of the art trail, each artist donates a piece of their artwork for the Secret Auction. Visitors to the art trail place bids on the work and if they are the highest bidder they win an original piece or art (or an experience). All monies go back in to supporting the art trail, which is a not-for-profit organisation.

Leigh Art Trail is on from Saturday 9 to Saturday 16 June 2018. SEVEN are exhibiting at Venue 49 at Planet Leasing. 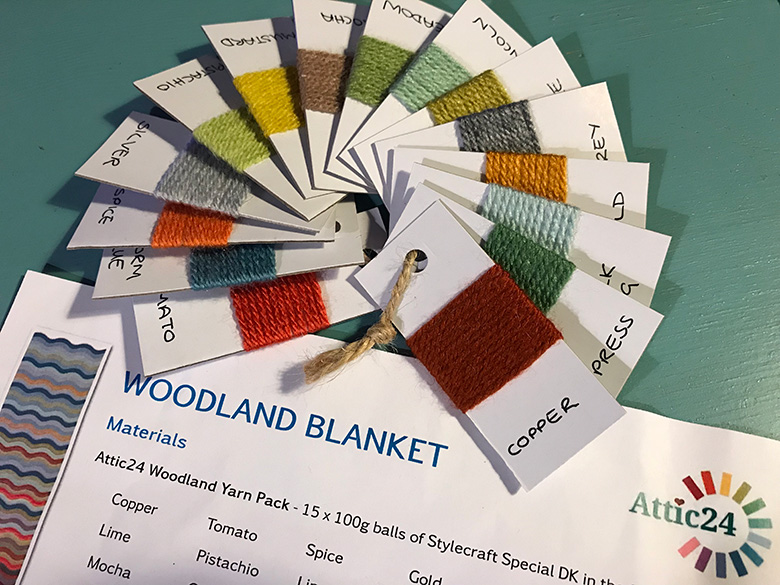 Being a newbie to the ‘Crochet-A-Long’ (CAL), I found the Woodland Blanket CAL on the Attic24 blog and thought it would be a good project to try.  The wool was a Christmas present from my mum and when it arrived it sat under the Christmas tree…waiting…then on Christmas day I could finally open it. Yippee!! What yummy colours!!

The pattern was due to be released on a weekly basis, starting in January, via the Attic24 blog. So, with a week or two to go I had some free time on my hands. Firstly I decided rewind the balls of yarn into cakes. Its just a personal preference but it gives you the opportunity to check the wool for any problems before you start; and it makes it easier to pull the yarn from the centre, so the ball doesn’t bounce around.

Secondly, I made my colour tags, so that I could easily identify my colours as I’d removed the ball bands. 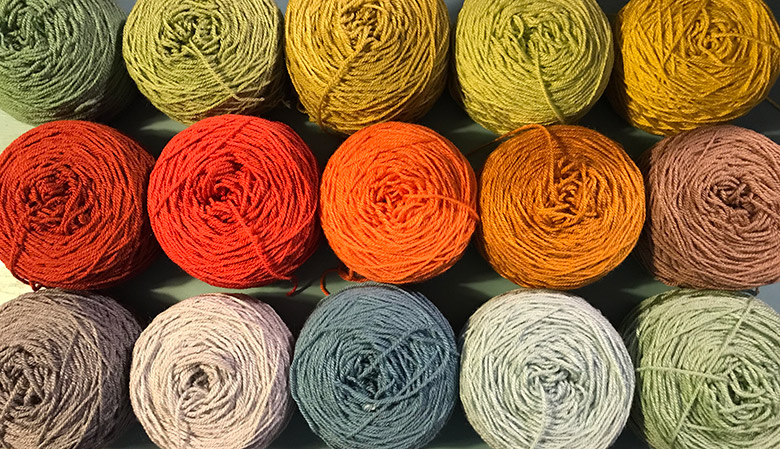 Then in January the first week of the pattern was released. I made my tension piece and began my foundation chain. Both steps took a few attempts to get right.

The pattern was a variation on a ripple stitch and I was surprised how easy it was to do the pattern wrong and it wouldn’t be apparent until 2-3 rows along! I learned a new word during this project, ‘frogging’. Basically its a word for undoing your work, i.e. ‘rip it, rip it’. I lost count how many rows I had to undo. 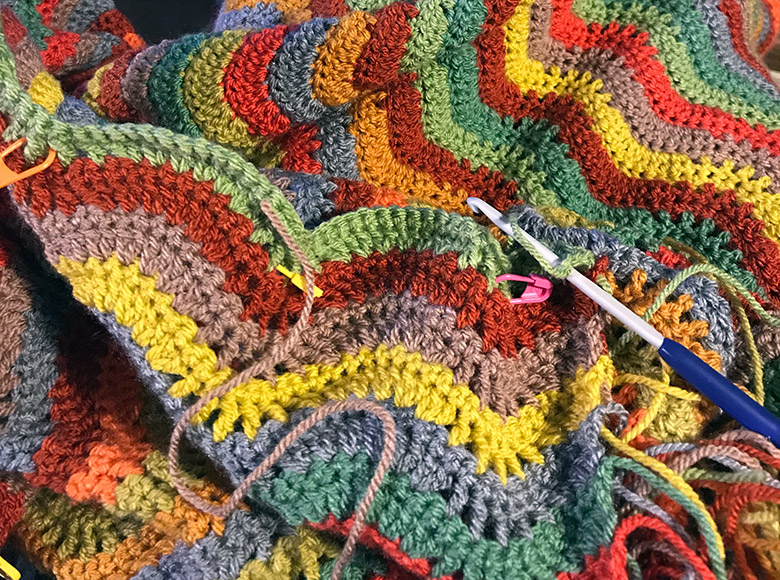 Still, I persevered and placed markers along the row and counted, counted, counted! By the time I was half-way through the blanket I finally got into the rhythm of the pattern and began to enjoy it more.

The number of pattern rows released each week was more than I could comfortably keep up with but thanks to a ‘spare’ week at the end I managed to get myself back on track.

This is my finished blanket! Its so soft and warm – I absolutely love it! 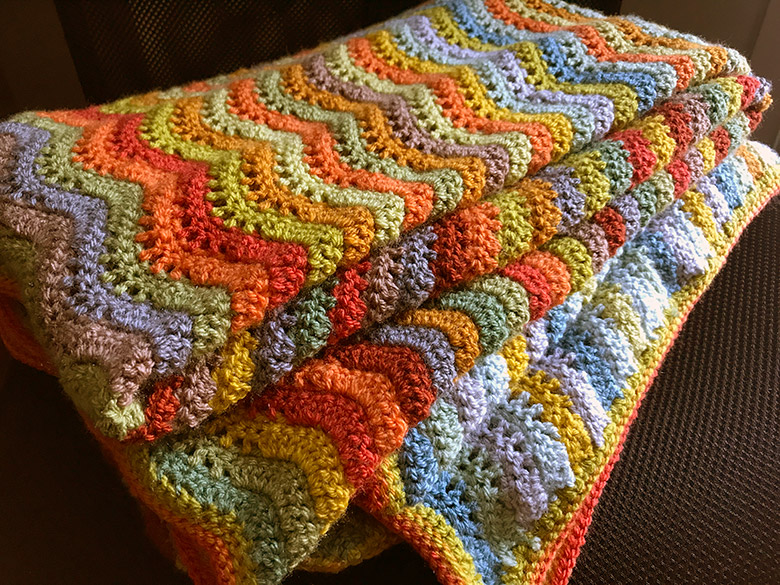 I live in the UK and it couldn’t have been finished at a better time…literally just in time for the ‘Beast from the East’. Freezing temperatures has meant this blanket has been put to good use already. 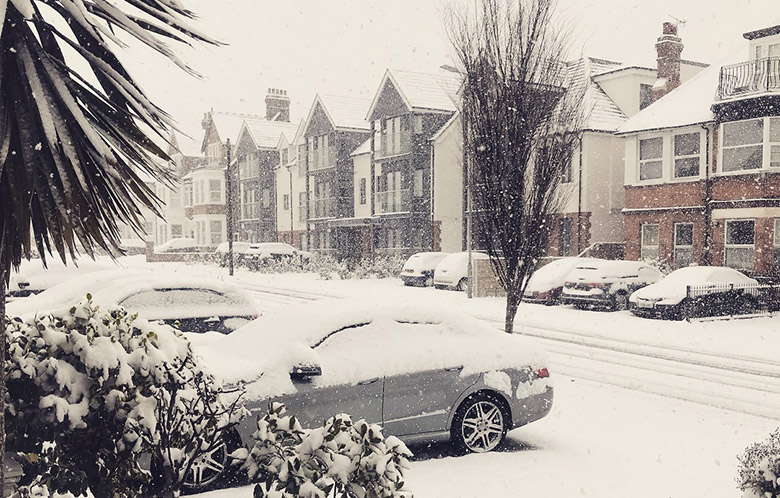 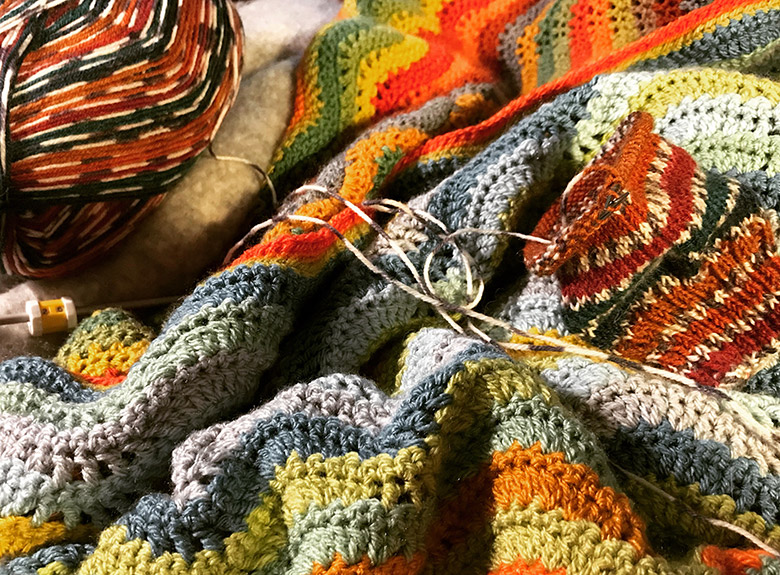